This is my 5th summer living in Alberta. In that time, I have climbed a lot of classic rockies routes but what Kyle and I have not been able to do is summit one of the 11,000 ft peaks in the rockies. It is not for lack of trying. In the spring of 2014, we made an attempt on Mt. Joffre on skis. Wind loading on the upper slopes made us reconsider and we turned back at the base of the final face. In 2015, we made it to the ridge of Mt. Victoria after post-holing for hours up the glacier, but turned around due to treacherous snow-covered rock, sketchy sun-warmed faces and fatigue. Last year, we made it half way up Mt. Temple but were once again thwarted by recent snowfall that had us tunneling through waist-deep drifts. This year, we decided to try Mt. Edith Cavell (Grade III 5.3) in Jasper National Park.
The Cavell Road is undergoing some upgrades, and is closed overnight. The earliest you can drive up to the trailhead is 8 am, not ideal for a 10-14 hour route (as recommended by the 11,000'ers book). We were able to book into the Edith Cavell HI Hostel, which is 2 km from the trailhead, so we could get an alpine start. We left the car at 5 am Saturday morning. The approach follows the Cavell Meadows hiking trail for longer than you expect. It stays just to the right of the forest and you keep going until you are pretty sure that you missed the turn. Then you get to a sign that clearly marks the way. It is very handy.
After the sign, follow a less obvious trail through the rubble. We accidentally ended up on a moraine to the right of the trail. The correct route is to stay low and to the left of the moraine until you reach a large scree slope below the farthest right patch of snow. Scramble up the scree then up the rock to the left of the snow patch. We passed 2 parties through this section by taking this direct route while they put on crampons to climb up the snow. At the top of the snow patch, you are at the col at the bottom of the East Ridge of Edith Cavell. We arrived just as the sun was coming up (1.5 hours approach).

Looking up from the col, we could see the first section of the route and another party of 2 ahead. We made good time scrambling up the rock to the right of the snow gully. It was easy scrambling without the exposure I was expecting, but I knew that was yet to come.
At the bench between the lower section of scrambling and the upper climbing section, we passed the party of 2. They had got a super alpine start of 3:30 am but were not moving very quickly. We encountered our first dilemma at this point. The rocks were covered in slippery frost. It had been very cold overnight and was only 2 degrees when we left the vehicle. Although the sun was providing some warmth, it wasn't melting the ice as fast as we had hoped. In addition, we could see fresh snow on the ridge above us. From the bench, the East Ridge looks very formidable. I was very concerned about the upcoming climbing because in order to make good time, you need to solo the majority of it. We deliberated briefly before deciding to continue on, with a low threshold for bailing if it seemed too wet and slippery.
The route is seriously foreshortened (appears terrifying and hard from afar, but as you get closer it looks much more climbable). Things were going well. The rock was solid, if not a bit wet. We were moving efficiently and the climbing was quite easy. Then, Kyle dropped a rock on his finger, splitting the skin below his nail. For a moment we waited as his finger was numb and tingling and wouldn't stop bleeding. Again we threw around the idea of bailing. Fortunately, the bleeding stopped, the numbness improved and we carried on. By this time, despite easy climbing, I was getting very uncomfortable with the exposure. We had brought a half rope and a small rack of nuts and cams so we pitched out 2 pitches. Instantly I felt better and was climbing more confidently. I was also glad we had the rope because as we got higher, the ledges got much more snowy, adding to the excitement. The route is certainly not hard and in dry conditions is probably perfectly fine to solo, however a mistake could result in a fall down either face. Not my idea of a good time. We traded off efficiency for safety and I was 100% ok with that, but pitching out the remainder of the climb was going to take way too long and we wanted to be down before dark. We ended up simul-climbing the rest of the route, which let us move significantly faster, but still remain protected. A good compromise.
As we approached the summit, the multicolour quartzite became less solid, but the ridge was wider and less exposed. The final few metres to the summit involved climbing an icy patch of snow, which I chipped a few steps into with my ice ax as I was not in a great place to put on my crampons (which I hadn't used yet). The summit ridge has a huge cornice that hangs over the North Face and Angel Glacier. It was impressive to say the least.
We were psyched! Our first 11,000'er! We spent a few minutes on the top snapping photos before putting on the crampons to cross over the the West Ridge for the descent. It had taken us over 8 hours to summit and we still had a long way to go to finish the day, but the hard part was behind us, or so we thought.
There are 2 ways down from the summit. The most direct route is to down-climb and rappel the East Ridge, back the way you came. I was not interested in that idea at all, based on how sketched out I had been by the climbing already. The other option is to follow the scrambling trail down the West Ridge. This route is significantly easier in terms of technical maneuvers, however it is way longer and really unenjoyable. If I had to do it again, I would seriously consider descending the East Ridge, knowing how awful the West Ridge was. The trail was easy enough to find. We traversed to the third summit of Edith Cavell then headed down the main rib. The trail veered right and traversed the snowy southern slopes to the Edith Cavell-Sorrow Mountain col. Make sure you don't get tempted to start descending too early or you will get cliffed out. Walk all the way to the col before starting your descent.

The descent down the south face was heinous. Over 1000 m of loose, chossy awfulness that was unrelenting. It took us forever to pick our way down through the rock bands and scree, partially due to difficulty identifying a trail, but mostly because my feet were screaming in agony after spending a full day in mountain boots. My knees weren't too happy about the situation either.
Finally we hit the meadow at the bottom of the face. We were very happy to be out of the shooting gallery as we had seen one of the other climbers on the ridge and were concerned about rockfall down the slope (we had kicked many rocks down despite our best efforts not too). We still had plenty of daylight left so took a nice long break before starting down the trail. It was a steady descent through forest on a rooty trail that was a bit overgrown but easy to follow. After a few kilometres, we passed a group of hikers who had also been staying at the hostel with us. They informed us that we had 5 km to go. Unfortunately, they were wrong and it was actually 8 km back to the hostel as the trail wraps wide around the mountains. It was a relief to hit the main trail, which was more direct and easier going (very slight uphill grade). We followed that for the final 5 km and limped into the hostel for a total trip time of 14 hrs 40 mins (19 km and ~2000 m of elevation total). We were the first party to finish. The two other groups that were staying at the hostel arrived after dark which made for a very long day for them, but everyone got down safely which was great. I think that the snow really slowed everyone down. It was a big day out but we had the weather and long hours of daylight on our side. Despite some setbacks, we did a really good job of communicating about our concerns and being open to the option of bailing if needed. It was a fantastic day for our first 11,000'er, whats next? 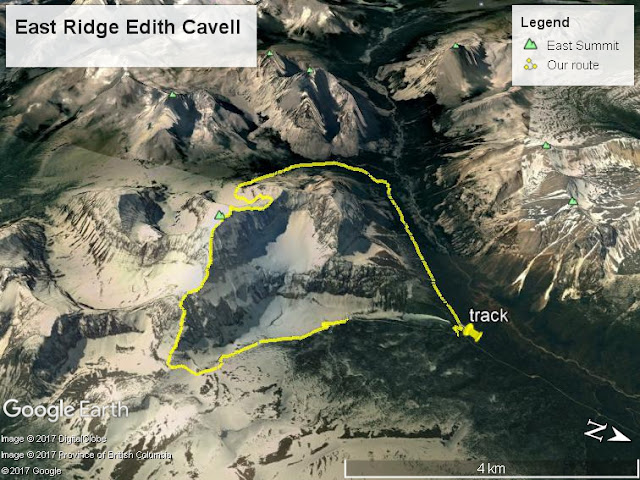 Posted by Jenny Strong at 10:21 PM No comments: