Winter is here! As December draws closer, ski hills are finishing up their final preparation for the season and skiers everywhere are itching to get out and play. Fortunately for me, I didn't have to wait for the hill to open and was able to get out in the backcountry for some early season turns over the last two weeks (Nov 9, 10 and 16th). Although I have been sick with mono for the last 2 months, I got the go-ahead to return to activities a few days before a tentatively planned trip to Fernie. Since I hadn't really done anything for a long time, I was expecting to have a really hard time with the touring. Luckily, everyone was also fairly out of shape and more than happy for an excuse to wait up and take breaks.
We started with an easy tour out to the back side of Fernie Wilderness Adventures. Jason had never ski-toured before and was also fairly new to skiing. We promised him mellow terrain but apparently our definitions of mellow are a bit different. He learned really quickly how hard it is to get up when your skis are tangled in the trees and spent more time falling down the hill than actually skiing. It was a steep learning curve for sure! It had snowed 75 cm in the week before we came out so I am guessing we were the first ones in this zone this season. It was still pretty thin and I was happy to walk away without any major scratches in my skis.
We took a day off to recover and enjoyed a bit of time in Fernie. I was able to meet Ken, the Alberta and East Kootnay rep for Marker/Volkl and sit in on a product knowledge session, so if you want to know anything about their awesome line up of gear and outerwear for this season, let me know! The Guides Hut in Fernie and Michael from Marker/Volkl was able to hook me up with some new gear for the season. I am especially looking forward to trying out my new skis, the Volkl One. I will wait until there is a bit more of a base though!
After a relaxing day in town, Kyle and I went for another easy ski tour. This time we found much better coverage and even got a few fresh turns!
We weren't the only ones who have been bit by the powder bug. There were tracks everywhere. Luckily for the Fernie locals, the hill is opening in just under a week.
Jen, Kyle and I decided to head to one of the local hills this past Saturday to try out some new gear. Jen was having a problem with her new dynafits which kept popping off, resulting in a sled ride down the mountain, a concussion and an awesome black eye. Get well soon Jen and we will be back skiing in no time!
This Sunday was another touring day! Despite the forecast calling for -19 with windchill, we headed out to Highwood Pass where it was snowing like crazy! We weren't the only ones with the same idea, I think we counted over 40 people out and about in the backcountry.
For the first part of the day, it was pretty socked-in but as we approached the ridge, the clouds broke and we could see! The snow looked awesome but there was a bit of a crust layer underneath so we had to be careful higher up. As we got close to the top, we heard and saw a big slid coming off the headwall on the other side of the valley. A big piece of cornice had fallen down the 80 degree slope, taking all the snow off the rocks. After that bit of excitement, we decided we had gone high enough for one day. It was a good choice too, the snow turned out to be much better lower down where the sun hadn't affected it.
Overall the last two weekends turned out to be a great chance to test out some new gear, get the legs moving again and get outside. Not to mention the few little tastes of the things to come this season. I think it is going to be a good winter. Pray for snow!

Posted by Jenny Strong at 2:07 PM No comments:

Somehow the fall zoomed by and it is already winter! Here is a bit of a recap of what I got up to before the snow started to fly:

Kyle and I did a bit of hiking out to find a huge ammonite fossil. It involved a creek crossing and a bit of bushwhacking to find the trail but the it was worth it! 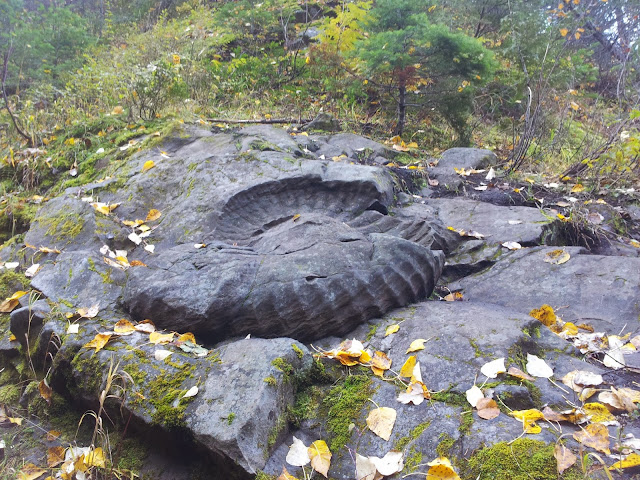 We spent a bit of time in Fernie, enjoying the awesome weather and changing leaves and did a bit of exploring on some of the logging roads. Overall it was a fairly uneventful fall (I spent most of it with mono so didn't get out alot) but am looking forward to some skiing this winter!

Posted by Jenny Strong at 1:27 PM No comments: