There and Back Again: A Brian Waddington Tale 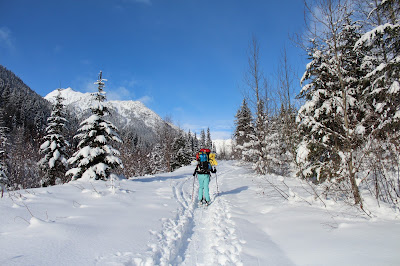 This Christmas holiday, it was decided that we should try and avoid the craziness of Whistler and the long lift lines by escaping the the backcountry for a few days. Large amounts of snow before Christmas had us concerned about avalanche stability, weather and visibility but this turned out to be the least of our worries in the end. The skies were clear, the snow was stable and conditions were perfect for ski touring! 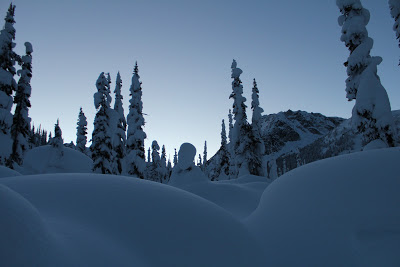 Kyle arrived on Christmas night. The plan was to head out to Brian Waddington hut with the UBC Varsity Outdoors Club for 6 days where we were to be staying at the hut for their annual New Years party and ski amazing terrain all week. Unfortunately, Kyle came down with the flu a day after arriving in Whistler. The departure for the trip had to be postponed for two days while he recovered. This didn't stop David and Tyler from heading up to the cabin for their first winter hut trip experience ever. Their trip is worthy of its own story, involving breaking trail to the hut in the dark, a midnight rescue and some fantastic skiing. I will let them tell you about that one.

Back in Whistler, Kyle and I brainstormed various potential plans but eventually decided that we would head into Brian Waddington despite the delay. I was concerned as I had heard stories about how difficult it can be to get to the hut, involving a 10km (feels much longer) skin up a logging road then through a steep forest before arriving at the lake where the hut is situated. We got lucky and things went smoothly on the walk in. It was an exhausting trek but spirits were high when we finally spotted the cabin across the lake.

After a well deserved dinner and some socializing with the others at the hut, we collapsed into our sleeping bags around 8 pm to prepare for the next day. Kyle had his heart set on summiting one of the larger peaks in the immediate area, Aragorn, which was going to be a long walk.


We awoke to bluebird skies and said goodbye to David and Tyler who had to return to Vancouver that day. It was so nice to only have a day pack on after the 6 hour hike the day before with a massive overnight bag. The hike out to Aragon was gorgeous, and as we made our approach the views just kept getting more and more spectacular. 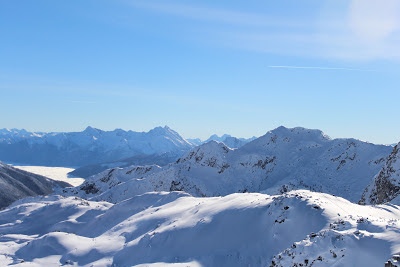 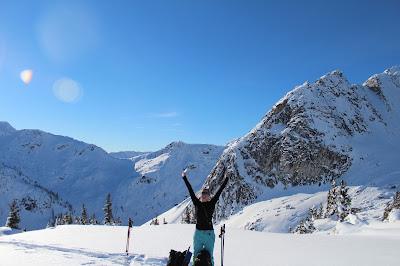 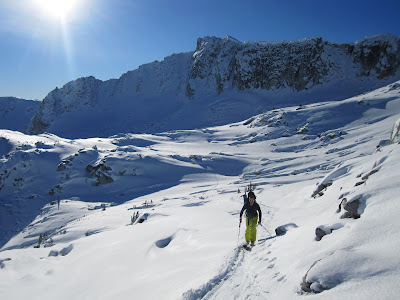 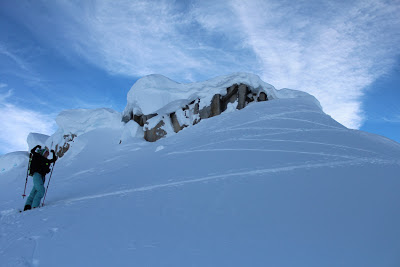 We reached Aragon summit at about 2 pm which was earlier than we had expected. We spent ages on the peak taking photos and struggling up onto the boulder that marked the true peak. From the top we could see all the way to Whistler and Black Tusk! 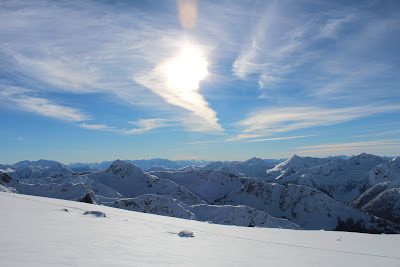 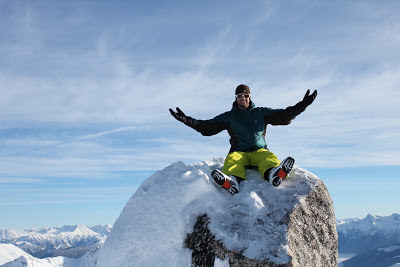 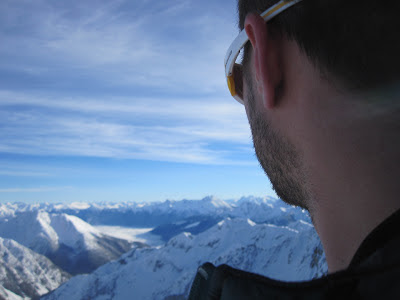 We skied back down the way we went up, which was really fun. There was still a long walk out, but the accomplishment of getting to the top of the mountain made it totally worth it. We had planned on doing a big skiing day the next day anyways.


Back at the hut, as Kyle was making dinner, I started to feel pretty bad. Turns out I had caught the same flu that Kyle had a few days earlier. I got to spend the evening curled up in my sleeping bag trying not to throw up as cheerful VOC'ers cooked dinner, chatted about their ski adventures and sang songs with guitar and recorder accompaniment. It was a pretty miserable night for me, trying to sleep in the unheated hut, and desperately wanting to join in the fun with everyone else.


I woke up (or stopped trying to sleep) on New Years Eve feeling a bit better, but still very sick. I hadn't had anything to eat since lunch the previous day and had been throwing up all night. It was time to pull the plug on the already shortened trip and head home. The exit from the hut is not as easy as just skiing down a hill. It starts with a tour back across the lake and through some rolling hills before descending really steeply through tight trees. This was followed by a flat road with lots of small creeks and finally a downhill on the road all the way back to the car. With my heavy pack still loaded with food that I hadn't eaten, making my way down was painfully slow. Kyle kept me going with a positive attitude and endless encouragement which kept me from just giving up entirely. I have never been so exhausted.


It seemed to take forever but we finally got out of the forest. Seeing the car has never been such a relief.

In the end, our 6 day trip to Brian Waddington hut turned into a 3 day trip that involved only 1 day of skiing and lots of sickness, however the one day that we did get made the whole thing worth it. I spent New Years drinking ginger ale and eating small amounts of cheese fondue before falling asleep before 10:30 pm, but I got to spend it with Kyle and that was all I really wanted to do anyways!

Posted by Jenny Strong at 12:33 PM No comments: