The Juan de Fuca trail is a 47km marine trail that spans from China Beach to Botanical Beach on the west coast of Vancouver Island. It is farther south than the more popular West Coast Trail and is much different, according to Kyle, who has done both. The Juan de Fuca trail was originally used as a telegraph line maintenance trail. This trip was my first ever experience with a backpacking trip. I was pretty nervous as I had never done any hiking that lasted longer than 8 hours before, and definitely not with an overnight bag. I wasn't able to find a good pack for the trip so I ended up with an old backpack from the closet, the same bag Angela had traveled around Europe with a month earlier. Although it wasn't ideal, it fit everything (barely) and it didn't break during the trip, which surprised me a little.

The trip was part of a string of trips spanning 2 weekends and a week that I had off. Our first stop was Bowen Island for the notorious dock dance. After some waterskiing, dock dancing, boat stealing and croquet, Kyle and I hopped on the Nanaimo ferry early Monday morning to begin the trip.
We spent Monday doing a bit of rock climbing in Nanaimo, then drove west to Port Renfrew on a road that we expected to be unpaved, and were pleased to find was pavement the entire way. We arrived ahead of schedule which allowed us some time to organize our lives after being on Bowen and leave all the extra food that we had brought in the car instead of carrying it all the way along the trail with us. We caught the trail bus to China Beach along with a bunch of hikers who had just completed the trail and were going back to retrieve their cars. All they could talk about was how hard Bear Beach to Chin Beach was and the wonders that are icebreaker clothing, "it doesn't even smell!" 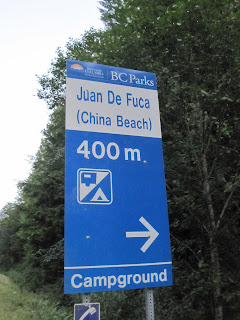 We spent the night at the China Beach Provincial Park campsite. It felt strange to be surrounded by car campers and large RV's with our tiny 2 man tent and only our backpacks. It felt even stranger to have to hang our food when everyone else could just throw it in their car. We spent the evening exploring the beach before heading to bed. I was pretty stoked to get the hike started the next morning!

We had a really lazy start and left the campsite around 10:30. We had about 1km of road before we even started the hike. After some camp fee faff, we were off. The trail started off gently and after what felt like nothing, we had arrived at Mystic Beach, the first of many beaches along the hike. This was the only sandy beach that we encountered and it had a great ropeswing. We had also read that there was a cool waterfall. It was a bit of a disappointment, but not enough to skip the photo op.

The rest of the day was mostly in the forest. Despite the fact that it was marked moderate on the map, I found the 5.7 km from Mystic to Bear Beach deceivingly tough since it was so steep up and down. We snagged the first campsite we saw and had most of the afternoon to hang out, nap and cook dinner. Since we had started that day I had been very envious of Fred, Kyle's duck that he carries with him as his mascot. I was extremely excited when Kyle found a carved wooden moose that was missing an antler. I bugged him into giving him to me and we named him Bruce. My mascot envy had been satisfied. 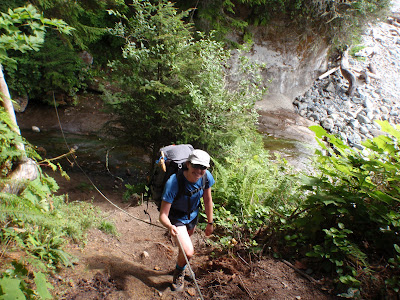 Wednesday (Day 2) was the part of the trip that looked like it was going to be the hardest. Although we only covered 12.5km, it was slow going, with lots of steep up and down that was hard on the knees. I can see why people like hiking poles!

We started the day off walking along Bear Beach which was really cool. I was hoping to see a whale on the trip but its hard to walk on the beach with a pack without staring at where you put your feet. Packs make it easy to tip over. It shocked me how much the pack throws your balance off. It takes quite a bit of getting used to.

At our campsite on Chin Beach, we collected a whole bunch of firewood and had a nice warm campfire. It was a clear night and we were able to catch the beginnings of the meteor shower and spotted some good shooting stars.

Thursday was by far our longest day. We had planned on hiking 17km to Parkinson Creek but when we reached Little Kuitshe Creek at 4pm (14km), we realized that Parkinson had no camping and the next campsite was another 6km instead of 3. Instead of stopping at Little Kuitshe, neither of us wanted to be the wimp, we decided to keep going to Payzant Creek, the next campground. This extended our day into a 20km mission that was a bit more than I had bargained for.

It was a very fun day anyways. The first section we hiked was from Chin Beach to Sombrio Beach, graded as difficult on the map. Being early in the day with lots of energy, we didn't really notice. We encountered some midday fog after a bright sunny start, but that burned off into a bluebird afternoon with great views.

We had lunch at Sombrio Beach and followed the water until one of the last trail access areas so that we could hike along the shore instead of the forest for a change. Although the section after Sombrio was apparently moderate, this was one of the slower going parts of the entire trip due to steep hills and deep mud. I got to try out my gaiters for the first time, they are awesome.

For the last few kilometers, we decided to follow a rocky shelf that was just above the water. It was beautiful. I was surprised that the trail hadn't had more options to walk along the water like this. Unfortunately, the shelf ended abruptly and we had to bushwack up a bear trail and clamber over logs before we found the trail again. It was at this point where I was loosing coordination and desire to continue. Luckily, we were only about 800m from the campsite. What a relief!
Friday (Day 4) was a nice easy day. We took it slow along the flat boardwalks that felt a lot more moderate than whatever we had been calling moderate the day before. The trail ended just after Botanical Beach, a spectacular tidal area full of life, including a large heron. We were pretty keen to finish for the trail so we didn't stay long. It felt great getting back to the parking lot, especially since we had to add an extra 2.5 km to the hike to get back to the truck in Port Renfrew. We celebrated with some well deserved fish and chips. I had such a fun time hiking (minus the blisters) and am pretty stoked to get out there and do some more of it in the near future. Thanks for the awesome birthday present Kyle!

Email ThisBlogThis!Share to TwitterShare to FacebookShare to Pinterest
Labels: Scrambling